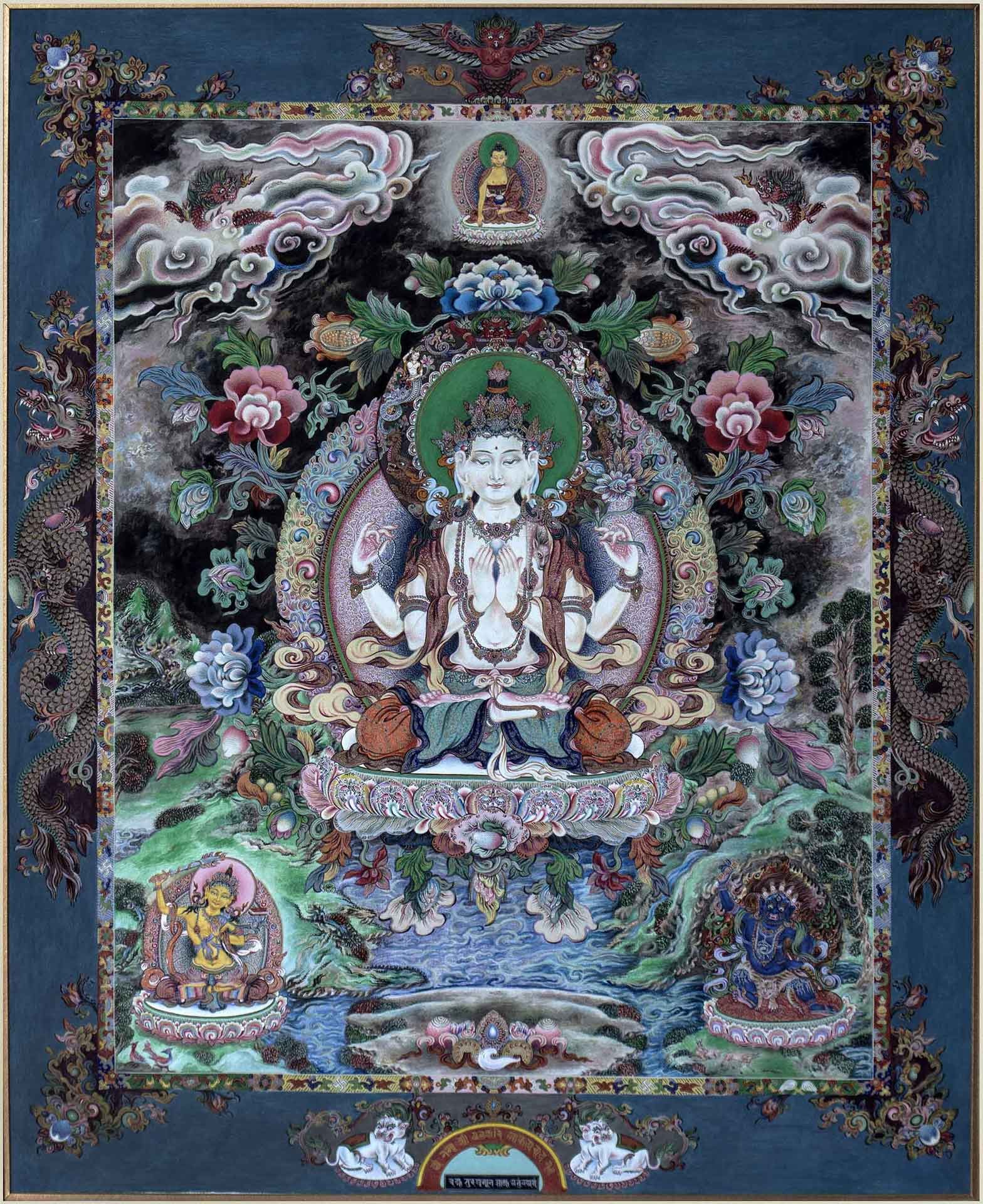 Shadaksheri Lokesvara is known as the Bodhisattva of Compassion, generally portrayed with four hands. His first pair of hands holds a wish-fulfilling jewel called ‘Chintamani’ at his heart and his upper two hand holds a crystal rosary and a stem of lotus blossom respectively. He is flanked by Manjushree (bottom right) and Vajrapani (bottom left). This trinity of virtue represents wisdom (Manjushree), compassion (Shadaksari Lokesvara) and power (Vajrapani) respectively. The three together are collectively known as Rigsum Gonpo: Lords of the Three Families and Protectors of the Three Realms.

Calming serenade of the mantra Om Mani Padme Hun creates an incantation that exhilarates mind and body. Many people are familiar with this mantra, which symbolizes a spiritual and collected version of self, whether consciously or unconsciously. This
mantra resides in every fragment in a land like Nepal, which is guarded by majestic, magical creatures and is home to the Gods. One can witness a variety of things in a lake, including fish, animals, and plants, as well as contaminations, and sludges. Even from the lake with the besmirching water, there can emerge a lotus, which is completely isolated of any impurities.

The origin of Sadaksheri Lokesvara is associated with a thousand-petaled lotus having a Mani Ratna at its crest. The seed syllable of the Mani Ratna is Hri from which the Shadaksheri Lokesvara manifested. The root mantra of Shadaksheri Lokesvara is Om Mani Padme Hun. The mantra has multi-dimensional meaning and it is believed that solely chanting it will purify the mind and bring prosperity to beings. It is a rare occurrence to recite and receive this initiation of tremendous knowledge. The grandeur of this mantra is explained in kārandabyūha-sūtra and Gunakārandabyūha-sūtra. It is the heart of Bodhisattva Avalokitesvara practice. The mantra is associated with Shadaksheri Lokesvara, one of the 108 Lokesvaras said to be guarding and harboring in the Valley. Lokesvara is the compassionate one, existing to aid humanity and eradicate their sufferings.

Shadaksheri Lokesvara is generally affiliated with the Sangha Kul according to Mahayana Dharma. Revered as Avivartika Bodhisattva, which classifies him as the one who has completed all the Bodhisattva Ideals (Bodhisattva Charya) and currently resides in the Akanista Devlok. The Kul (root) deity of the Lokesvara is Amitabh Buddha, one of the Pancha Buddha. The Lokesvara has absolute great compassion, following the doctrine of serving and aiding every sentient being living in the six realms, six directions, and annihilate them from their sufferings to the path of enlightenment. This vow makes him Avalokitesvara. Shadaksheri Lokesvara is graceful when embodying his iconographic form. He is white adorned and crowned with jewels, poised perfectly with legs locked closely. Lokesvara's compassion is evident in his eyes, looking down towards the realm of living beings. An antelope’s skin is wrapped over his left shoulder. He has four hands. With his principal hands, he has the kritangali mudra, joined together in the gesture of namaskar, prayer or greeting. The upper right hand is in the vitarkamudra, the gesture of reasoning, carrying a prayer beads while the upper left hand holds a lotus. 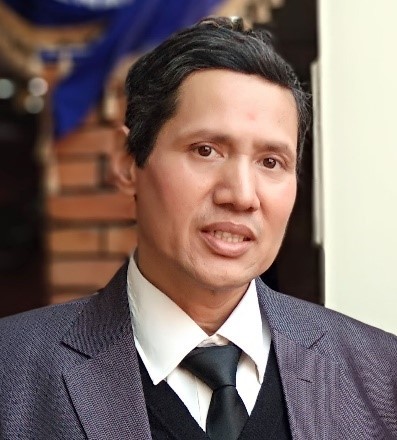