Born in the Terai near Lahan (southeastern Nepal) in 1961, S. C. Suman (as he is known) is one of the foremost artists with a specific passion for the art of Mithila. This art form is centred in the southern Terai; it straddles the border area with Bihar in India and is a very ancient art form with a unique style. His father was in banking, and he is the only family member to follow a career in art. He warmly tells us how his grandmother influenced him as a boy – she used to paint and draw pictures during the many festivals. All these years later, he refers to her as his guru.

He did not have any formal training in art, studying for his Bachelor’s in Biology at Darbhanga University in India, just across the border from his home in Nepal. Having decided that he wanted to be an artist and not a scientist, he studied textile design in Mumbai and then worked for several years in Biratnagar as a textile designer. He now works mostly as a freelance artist, but is also still involved in textile design as a consultant.

Suman reminds us that Mithila art, although based on tradition, does not have ‘a ritualistic need for specific factors to follow’, so it allows for personal interpretation, artistic flair and modernist overtones. Mithila art in all its forms has a very distinctive traditional style, whether as art or as handicrafts. Mithila art can be traced back over 3000 years in the region of Janakpur, so there is plenty of subject matter to explore.

It is surprising to know that Suman can produce such fine artwork in just a week or two, although larger paintings might need a month. Before commercial art paper was available from 1990, he used traditional materials. He uses natural pigments and acrylics, which he says give him a much more flexible medium to work with. He notes that some natural pigments use cow dung mixed with mud and flowers!

He sometimes mixes Mithila style with other forms like Newari themes, illustrating the diversity of art across the country. He works on commissions. One of his main goals is to fuse the traditional aspects of Mithila art with contemporary themes to maintain the culture through innovative additions. The detail of both the main subject matter and the background in his paintings is quite astonishing – the result of an amazing talent and the skill of his brushwork. He has a keen sense of social change that is reflected in some of his work.

His work is on display across the globe from Bangladesh to Canada and from Russia to Europe.  The list of his exhibitions and awards is monumental – it is amazing that he can find time for any consulting work! He took part in the ‘Tangential Stress Exhibition’ and has paintings on display at the Museum of Nepali Art (MoNA). 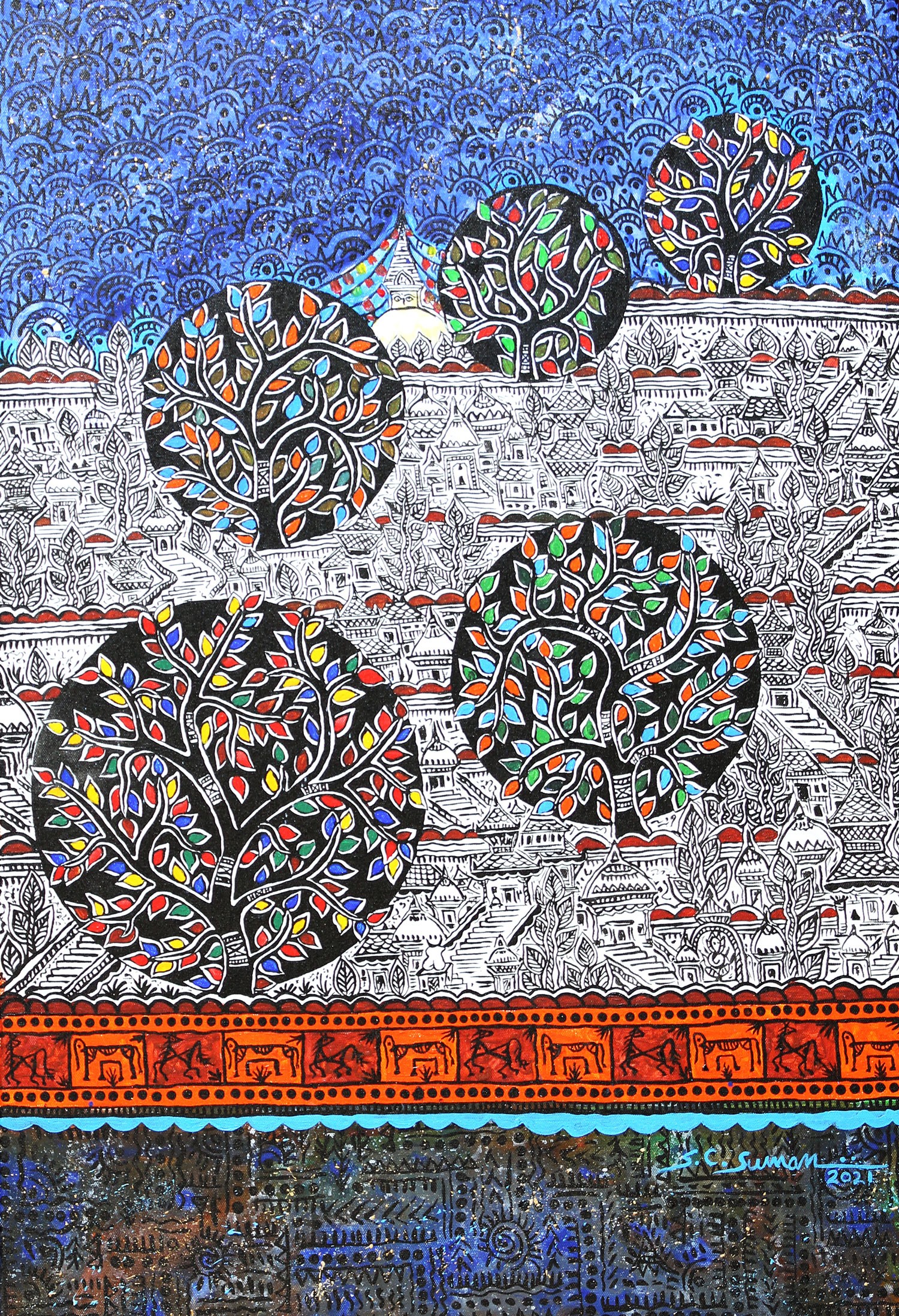