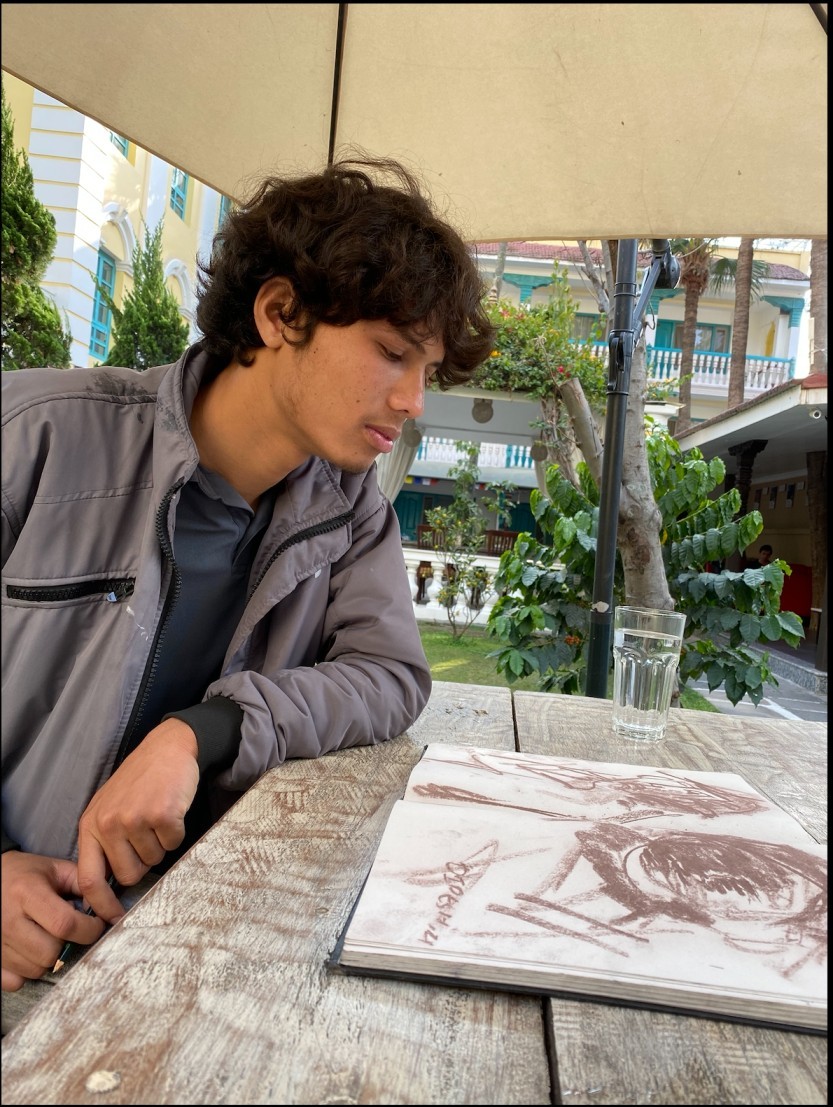 Born on 2005 in Jumla to a family who struggled with finances, Dipesh Nepali, from a young age was interested in everything. Distinct among his two elder brothers, self-studying mathematics and science was to him fascinating. He recalls spending hours learning about how the universe works. Everyone, says Nepali, has an innate ability to understand and create art. The written and unwritten rules of society, materialism and the thirst after superficial satisfaction causes the artist within us all to go into hiding, but given the willingness to search, can be found and treasured. Similarly, art, he says, was buried deep within his identity, only needing to be remembered and recalled. Around grade seven is when Nepali says he rediscovered his love for art and in some ways, himself.

Obsessively self-studying art history, criticism, and various styles of western art since his personal renaissance, Nepali started to find it taking over his other interests. Nothing to him besides art was of importance. It gave him a sense of meaning and purpose.

Journeying to Kathmandu to develop himself and his craft, Nepali found himself struggling internally as well as externally. Taking refuge in an elder brother he was close to; Nepali’s external burden was somehow lessened. Internally however, there was no relief. Buried under his own thoughts, feelings and emotions, Nepali buried himself in his work, using it almost as an internal band—aid. Having learnt and practiced various techniques and methods used in the various genre of art, Nepali developed an internal mechanism to take his identity and emotions and materialize them on canvas. Painting became for him the outlet where repressed emotions and feelings could be let loose.

Art was his escape from himself. A way to be truly free amid the numerous chains of societal existence. It is where the chaos of his psyche find rest and where he can finally let loose. For Nepali, nothing can rival the emotional release that he experiences when he paints. Inspiration, he says, can appear out of nowhere, even something as benign as a chair can, to him, be a source of inspiration. Nature and the self are the two components of reality and the highest forms of inspiration he says.

Renting a studio in Chhauni, Dipesh works exclusively in oil paints because of the technical challenge and the blend of colors that he can achieve through them. Acrylic, says Nepali, is great as a learning tool and for certain types of art, using it himself in the beginning. The essence and depth that he tries to bring to his paintings and the unique blend of the colors he looks for in trying to express his complex emotion`s requires the use of oil.

At only 16 years old, Dipesh’s mind has travelled for longer than his body has. With an incredibly mature and unique vision of the world, one finds within his work expressions of suffering and a want to be free. Art, says Nepali is the only things he has in mind for the future and each day he aims to learn, implement and experiment in his craft in an attempt to express who he is.