Mystical, mythical, and the king of birds, Garuḍa, is a creature depicted frequently in the traditional artworks and their iconographic elements. It is highly regarded in both Hindu and Buddhist mythology.

Parabrahman, Paramatmā, is identical to Atmā or self. According to Vaishnavism, Nārāyaṇa or Viṣṇu is parabrahman and hence, the soul of every sentient being is identical to Nārāyaṇa. Garuḍa is regarded as the vāhāna (vehicle) of Nārāyaṇa and is often depicted in namaskār mudrā facing the idol of Nārāyaṇa.

Garuḍa is also placed in the entrance or toraṇas of various temples. The namaskār mudrā signifies the reverence for the divinity that is present in each individual. Anyone who arrives at the entrance is greeted by Garuḍa with the utmost respect.
The main intention of Shrestha’s Garuḍa is to be placed at the entrance of his newly constructed home. The Garuḍa’s sight in the painting is seen to be sharp and its placement at the home entrance can be symbolic of
farsightedness and great capability of analyzing circumstances. In today’s time, the portrayal of Garuḍa has been anthropomorphized, which can be seen in his artwork as well.

In Buddhism, Garuḍa is seen as the vāhāna of Amoghasiddhi Buddha, one of the Pancha Dhyāni buddha. It also symbolizes sky or heaven. Garuḍa can be seen in a constant battle with the nāgas, showcased in the painting with serpent’s garland and in the ankles. 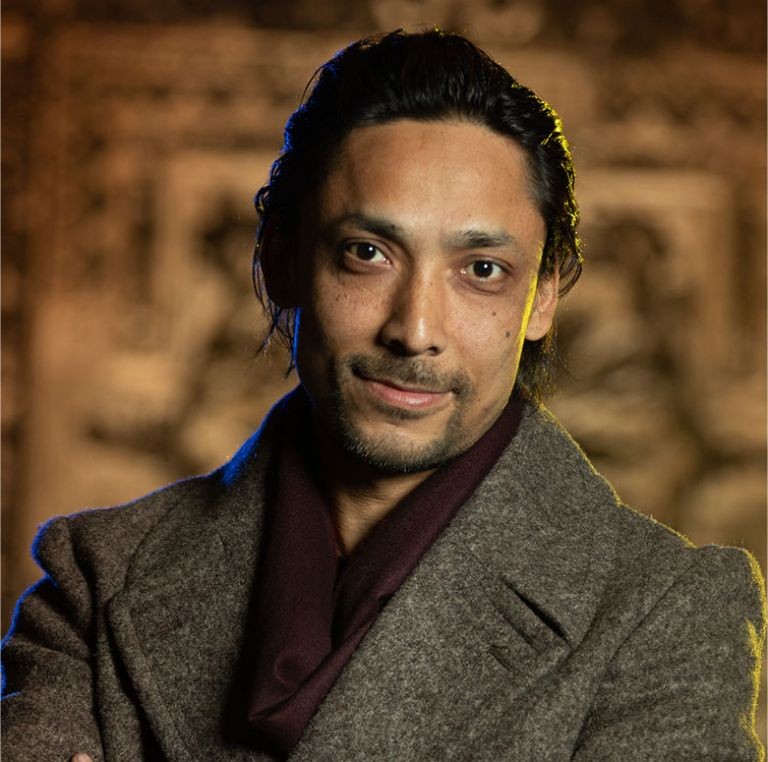